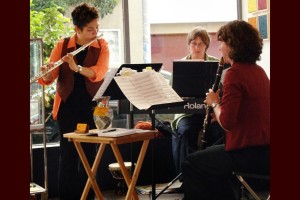 The Bernal Hill Players was formed in 2008 by Bernal Hill residents Jennifer Peringer, Martha Rodríguez-Salazar, and Leah di Tullio. Since then they have been playing concerts throughout the Bay Area and Mexico City, and have commissioned several pieces by Bay Area composers for a project about the neighborhoods of San Francisco, called “San Francisco: In and About the City”. This project has resulted in a CD due out in February 2012. Their next big project involves commissioning pieces about neighborhoods of Mexico City by Mexican composers.

Their mission is to play a wide and rich repertoire, to commission new works, to create interesting arrangements of existing works, and to use chamber music as a way of both celebrating local community and creating cross-cultural musical connections.
Check out their website
Friday, March 30th, 2012
Pro Arts Gallery
150 Frank H. Ogawa Plaza
Oakland, CA 94612