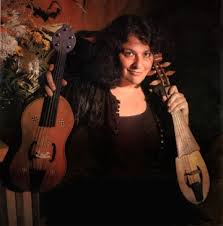 Multi-instrumentalist and occasional vocalist Shira Kammen has spent well over half her life exploring the worlds of early and traditional music. A member for many years of the early music Ensembles Alcatraz and Project Ars Nova, and Medieval Strings, she has also worked with Sequentia, Hesperion XX, the Boston Camerata, the Balkan group Kitka, the King’s Noyse, the Newberry and Folger Consorts, the Oregon, California and San Francisco Shakespeare Festivals, and is the founder of Class V Music, an ensemble dedicated to providing music on river rafting trips. She has performed and taught in the United States, Canada, Mexico, Europe, Israel, Morocco, Latvia, Russia and Japan, and on the Colorado, Rogue, Green, Grande Ronde, East Carson and Klamath Rivers.

Shira happily collaborated with singer/storyteller John Fleagle for fifteen years, and performs now with several groups: a medieval ensemble, Fortune’s Wheel: a new music group, Ephemeros; an eclectic ethnic band, Panacea; an English Country Dance band, Roguery,the early music ensembles Cançoniér and In Bocca al Lupo, as well as frequent collaborations with performers such as storyteller/harpist Patrick Ball, medieval music experts Margriet Tindemans and Anne Azéma, and in many theatrical and dance productions. She has worked with students in many different settings, among them teaching summer music workshops in the woods, coaching students of early music at Yale University, Case Western, the University of Oregon at Eugene, and working at specialized seminars at the Fondazione Cini in Venice, Italy and the Scuola Cantorum Basiliensis in Switzerland.

She has played on several television and movie soundtracks, including ‘O’, a modern high school-setting of Othello and ‘’The Nativity Story’, and has accompanied many diverse artists in recording projects, among them singers Azam Ali and Joanna Newsom. Some of her original music can be heard in an independent film about fans of the work of JRR Tolkien. The strangest place Shira has played is in the elephant pit of the Jerusalem Zoo. She has recently taken courses in Taiko drumming and voiceover acting. 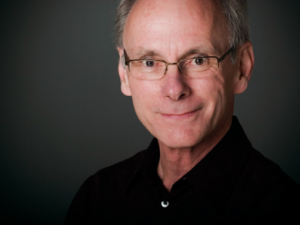 A native of San Francisco, Peter Maund studied percussion at the San Francisco Conservatory of Music and music, folklore and ethnomusicology at the University of California, Berkeley. A founding member of Ensemble Alcatraz and Alasdair Fraser’s Skyedance, he has performed with early and contemporary music ensembles including Alboka, Anonymous 4, Berkeley Contemporary Chamber Players, Chanticleer, Davka, El Mundo, The Harp Consort, Hesperion XX, Kitka, Los Cenzontles, Musica Pacifica, Philharmonia Baroque Orchestra and Voices of Music, among others.  Presenters and venues include Cal Performances, Carnegie Hall, Celtic Connections (Glasgow); Cervantino Festival (Guanajuato), Confederation House (Jerusalem); Edinburgh Festival; Festival Interceltique de Lorient; Festival Pau Casals; Folkfestival Dranouter; Horizante Orient Okzident (Berlin); The Kennedy Center; Lincoln Center; Palacio Congresos (Madrid); Queen Elizabeth Hall (London); and Tage Alter Musik (Regensburg).  He is the author of “Percussion” in A Performers Guide to Medieval Music, Indiana University Press, 2000.  He has served on the faculty of the University of California, Berkeley as well as in workshops sponsored by Amherst Early Music, the San Francisco Early Music Society, the American Recorder Society and the American Orff-Schulwerk Association.  Described by the Glasgow Herald as “the most considerate and imaginative of percussionists” he can be heard on over 50 recordings. 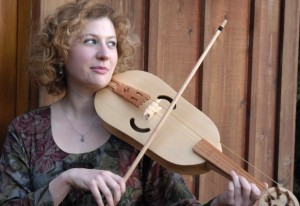 Michelle Levy has been performing on and exploring the possibilities of bowed string instruments for over 20 years. She studied classical viola & Old Time fiddle/banjo at Brown University, then continued her musical studies in Medieval performance practice on vielle with Shira Kammen and with members of Sequentia at the Vancouver Medieval Programme at the University of British Columbia.

She comes from a family of artists; her grandfather, Eliezer, is a multi-instrumentalist who regularly played for folk dances in Tel-Aviv in the 1940′s. Currently based in the San Francisco Bay area, California, she is Artistic Director of Redwood Guild of Early Music and is an Artist-In-Residence with Youth In Arts. She has performed internationally with an eclectic variety of ensembles and vocalists, including The Boston Camerata and vocalists Owain Phyfe, Abby Green, Maia Archote, and Moh Alileche. She’s been a featured performer at the Vancouver Early Music Festival (2013) with Sequentia & The Elaine Adair Ensemble as well as at the Connecticut Early Music Festival (2010) with Istanpitta Early Music Ensemble, and her new Contra-dance band, TriTonic, recently featured at the New England Folk Festival 2013 (NEFFA). She enjoys playing fiddle for contra and English country dance camps in the woods as well as performing with Shira Kammen’s Class V Music, an ensemble dedicated to creating music on whitewater rafting trips. www.MichelleVielle.com

As a fiddle/violin teacher, Michelle is certified in the Orff Shulwerk approach to teaching music as well as the Mark O’Connor Method. She teaches all ages from 3 and up.

REFRESHMENTS PROVIDED DURING THE CONCERT