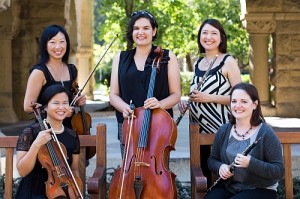 The Divisa Ensemble is recognized for its engaging performances and eclectic programming. A quintet of flute, oboe, violin, viola, and cello, the ensemble’s instrumentation and “mix-and-match” approach allow for a wide variety of repertoire comprising all traditional and contemporary styles.

Oboist Meave Cox is an avid orchestral and chamber musician in the Bay Area. She has performed with many of the Bay Area’s regional orchestras, and also frequently appears at Stanford University and other Bay Area venues. She has served as Principal Oboe of the Master Sinfonia Chamber Orchestra since 2001, where she has often been featured as a soloist, having performed such works as Francaix’s The Flower Clock, Copland’s Quiet City, and Mozart’s Sinfonia Concertante.

Stephanie Ng, viola, is a graduate of the University of California at Berkeley and San Francisco State University. She also studied in London with Paul Silverthorne, Principal Viola in the London Symphony Orchestra. She has appeared at Carnegie Hall other venues worldwide, including Moscow, St. Petersburg, Amsterdam, and Paris. She has performed with Barbra Streisand, Chris Botti, and in the Broadway tour production of the Lion King. Currently, she performs with many Bay Area ensembles, small and large, and teaches violin, viola, and chamber music.

Sara Styles is an active cellist and music educator based in Menlo Park. She works for the El Camino Youth Symphony as their cello coach and Chamber Music Coordinator, is a teacher for Music for Families, and maintains a private studio. She can also be found performing with local symphonies or contracting ensembles for private events.

Tomiko Tsai is a flute performer and educator in the Bay Area. Tomiko performs often with local ensembles and as a soloist. Tomiko especially enjoys inspiring younger flutists. She maintains a full private teaching studio, directs several flute ensembles, and is a faculty member of the Northern California Flute Camp.

Eugenia Wie, a native of Chicago, began her studies with Betty Haag-Kuhnke and made her radio debut on Chicago Public Radio at the age of nine. She has performed in solo and chamber music concerts across North and South America, Asia and Europe and appeared at music festivals including Val-de-Charante, Banff Music Center for the Arts, Kneisel Hall, Schleswig-Holstein, Duo Masterclasses at Lausanne, and the International Music Seminar at Prussia Cove.