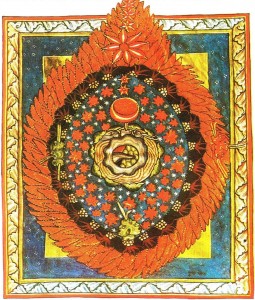 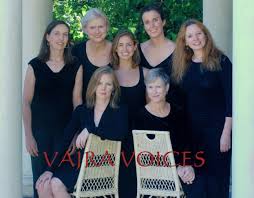 Vajra Voices comes together to perform early to modern music for women’s voices. Holding the questions of what makes historical music ‘authentic’ each individual in the ensemble contributes her unique voice, knowledge and expertise to make the meaning and expression of ancient western traditions relevant to our modern sensibilities. An attempt to understand context in the time the music is composed, its intended purpose, and how best to bring the meaning and expression forward to modern ears is of primary importance to Vajra Voices.

We begin with music of Hildegard von Bingen (1098-1179)— known as the Sybil of the Rhine— wherein we develop our own transcriptions from original manuscripts. Our program of French Troubadour and Trouvere repertory stems from our studies of the Poetria Nova of the 13th century rhetorician Geoffrey Vinsauf. Other programs on the horizon expand into the 21st century to include music of John Tavener, and Estonian composers, Veljo Tormis and Arvo Part.

The Bay area women’s ensemble Vajra Voices performs medieval to modern music in a singing style inspired by Hildegard von Bingen that is “clear, sweet, and strong.” In 2010, Vajra Voices debuted in the Berkeley Early Music Festival, and returned to the Festival in 2014 with the harp ensemble Angelorum, for an enthralling standing-room-only audience at St. Mark’s Episcopal Church. Following that concert Vajra Voices was engaged to sing for the Choral Eucharist celebration of the 40th Anniversary of the ordination of the first women ministers in the Episcopal Church in San Francisco’s Grace Cathedral. In 2014-15, Vajra Voices performs and records music of Hildegard von Bingen: In Celebration of the Divine Feminine. http://www.vajravoices.com

“Then he took the harp to tune it. God! whoever saw how well he handled it, touching the strings and making them vibrate, sometimes causing them to sing and at other times to join in harmonies, he would have been reminded of the heavenly harmony.”

The medieval harp in the 21st century has the same power to enchant and uplift that it had in the 12th. Angelorum, directed by renowned harpist Cheryl Ann Fulton, brings the music of the spheres down to earth weaving together medieval modes, melodies, and methods of improvisation on historical harps to create a vibrant, shimmering tapestry of sound.

Angelorum, the world’s only medieval harp choir, was first formed in 1996 by director Cheryl Ann Fulton. The group has performed in the Festival of Harps; with Chanticleer in the production of The Resurrection Play of Tours; and appeared with Ensemble Alcatraz and KITKA on their CD Cantigas de Amigo. The current group recently performed a program of the music of Hildegard von Bingen with singer Karen Clark and Vajra Voices for the 2014 Berkeley Early Music Festival and a CD recoding project is in the works. http://www.angelorumharps.com