BACH is thrilled to host an event at the Saint Joseph of Arimathea Church in Berkeley, CA which is its founding performance venue in 1998. 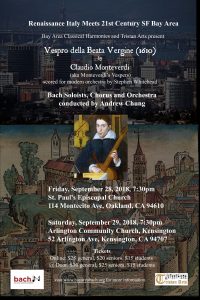 An evening of music which have remained structurally unchanged for 1500 years. 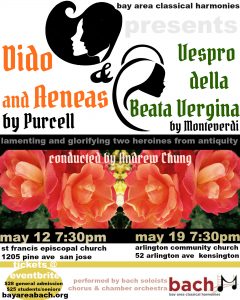 An evening of music from two pieces written at the beginning and end of the 17th century, celebrating the 330th anniversary of the composition of Dido and Aeneas by Henry Purcell 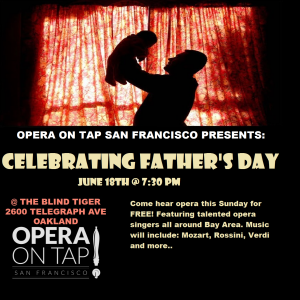 Come hear opera this Sunday for FREE!
Featuring talented opera singers all around Bay Area.
Music will include: Mozart, Rossini, Verdi and more..

May 20th & 21st
If Music Be the Food of Love:
Bay Area Classical Harmonies in Concert 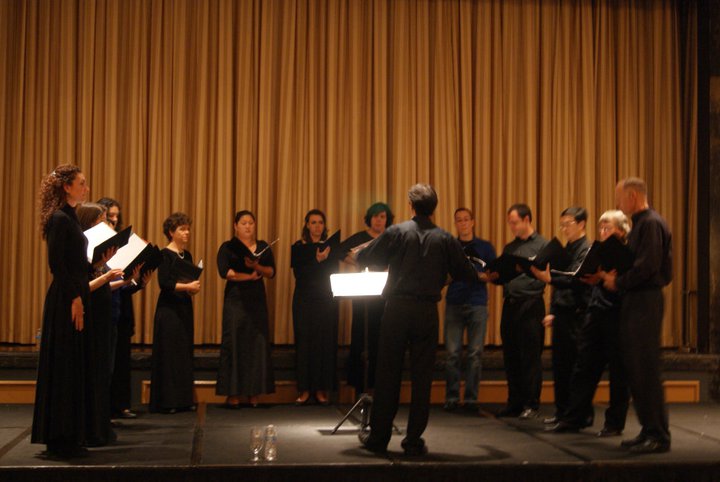 Celebrate spring with a concert full of the vibrance and romance of the season. Join Bay Area Classical Harmonies for a special evening of choral music that spans generations. An eclectic program of Monteverdi, Purcell, and contemporary American composers is united by the universal theme of love. Featured on the program are the world premieres of “Again and again,” “Do you remember,” and “Paradise Lost” by local composer Alexander Frank. Enjoy an evening of exquisite counterpoint and beautiful choral melodies with Bay Area Classical Harmonies, conducted by Andrew J. Chung. 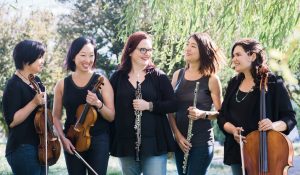 The Divisa Ensemble is recognized for its engaging performances and eclectic programming. A quintet of flute, oboe, violin, viola, and cello, the ensemble’s instrumentation and “mix-and-match” approach allow for a wide variety of repertoire comprising all traditional and contemporary styles. For more details please visit their website www.divisaensemble.com

Divisa Ensemble is thrilled to perform once again at the Arlington Community Church in the gorgeous hills of Kensington. Come join us for an evening of charming chamber music works on what is sure to be a lovely Spring evening!

Conversations, by Arthur Bliss
I. The Committee meeting
II. In the Wood
III. In the Ballroom
IV. Soliloquy
V. In the Tube at Oxford Circus 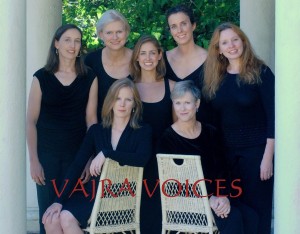 Inspired by the stories and voices of women, Remembered Migrations weaves medieval French chanson and motets with premieres of new works by Shira Kammen, and Theresa Wong. For the medieval trouvére the passion and pain of unrequited love was a virtuous pursuit. Theresa Wong’s new work, To Burst, To Bloom: Songs on Poems of 12th Century Taoist Immortal Sun Bu’er are settings of ancient texts on inner alchemy, these songs explore the fluid interplay of abstract vocal utterances with language and meaning. And, Shira Kammen’s lush settings of American poems – Cold Wind and Rain, and Sun, Moon, and Stars – align with traditional songs, such as, Jean Ritchie’s Now is the Cool of the Day to make for an evening of reflection and intrigue.

Shira Kammen is a Multi-instrumentalist and occasional vocalist Shira Kammen has spent well over half her life exploring the worlds of early and traditional music. A member for many years of the early music Ensembles Alcatraz and Project Ars Nova, and Medieval Strings, she has also worked with Sequentia, Hesperion XX, the Boston Camerata, the Balkan group Kitka, the King’s Noyse, the Newberry and Folger Consorts, the Oregon, California and San Francisco Shakespeare Festivals, and is the founder of Class V Music, an ensemble dedicated to providing music on river rafting trips. She has performed and taught in the United States, Canada, Mexico, Europe, Israel, Morocco, Latvia, Russia and Japan, and on the Colorado, Rogue, Green, Grande Ronde, East Carson and Klamath Rivers. The strangest place Shira has played is in the elephant pit of the Jerusalem Zoo. She has recently taken courses in Taiko drumming and voiceover acting. www.shirakammen.com

Theresa Wong is a composer, cellist and vocalist active at the intersection of music, experimentation, improvisation and the synergy of multiple disciplines. Bridging sound, movement, theater and visual art, her primary interest lies in finding the potential for transformation for both the artist and receiver alike. Wong has presented her work internationally at venues such as Fondation Cartier in Paris, Yerba Buena Center for the Arts in San Francisco, Fabbrica Europa in Florence Italy, Cafe Oto in London, Festival de Arte y Ópera Contemporánea in Morelia, Mexico, Unlimited 21 Festival in Wels, Austria and at The Stone and Roulette in New York City. She is the recipient of grants from the Center for Cultural Innovation, American Composers Forum, San Francisco Friends of Chamber Music and Meet The Composer. Wong is a Civitella Ranieri Foundation Fellow and has also been awarded artist residencies at the Headlands Center for the Arts and Yaddo. She currently works and resides in Berkeley, California. www.theresawong.org 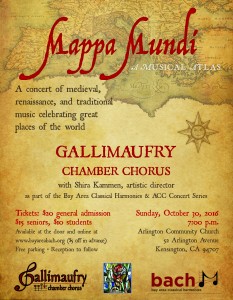 Please join BACH and ACC to a brand-new musical experience with GALLIMAUFRY. They are an ensemble of twenty-plus voices that sings mostly secular medieval and renaissance music, early texts set to new music, new arrangements of old tunes, and traditional music of various cultures celebrating great places of the world. 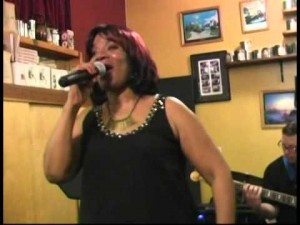 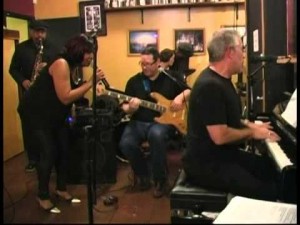 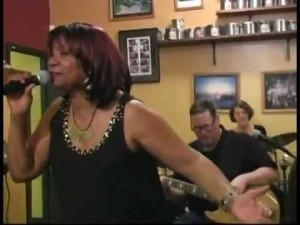 “Shugga” was born down at the crossroads; Where professional studio musicians meet Deep South Soul and bring you a musical experience that will both surprise and delight. We combine Jazz, Gospel, Pop, R&B and new thought effortless  all orchestrated by Larry Steelman.

Sugga, Helen, Larry, Jay Styne and Carrie Jadhe, create the most unique mix of soul & smarts in music today. Every genre, any song, and each venue is your opportunity to experience the “Shugga” magic. Hearing is believing…

Come and enjoy an evening of beautiful music that is tropically inspired with artful dining featuring renowned Chef Peter Jackson. This event is brought to you by the lush operatic pairings of Opera on Tap San Francisco and Bay Area Classical Harmonies. 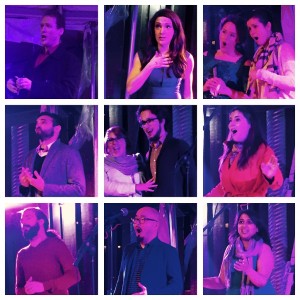 BACH is excited to partner with Canvasunderground, ACC, and Opera on Tap for a night of great music and delicious food. In keeping with musical theme of the evening “Song From Exotic Lands”, we have created a South Pacific inspired dinner.

Pineapple Up Side Down Banana Cake with Warm Chocolate Sauce

A glass of your choice of red or white wine will be provided.
Additional beverages are BYOB 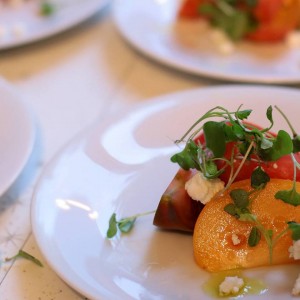 Soprano Sarah Fletcher
Arias/songs: The rose and the nightingale by Rimsky Korsakov
Addio, del Passato from La Traviata by Verdi
Bali Hai from South Pacific
Duets: Flower Duet from Lakme (with Claire)
Barcarolle from Tales of Hoffmann (with Claire)